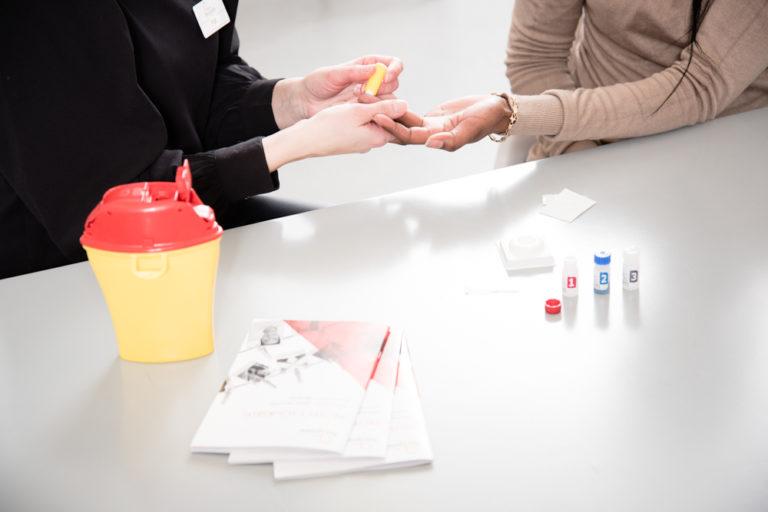 The tests that are used in HIV testing detect antibodies in the blood and sometimes also antigens. The commonly used HIV test is a combination test (HivAgAb Combo) which detects both antibodies and antigens. Usually the blood sample is taken from a vein in your arm. In organizations like Hivpoint it is common to use HIV rapid tests, because they are a fast and easy way to test HIV. The blood sample is taken from the fingertip and only a drop of blood is needed.  The test result is ready in 1-20 minutes, depending on the test being used. Usually rapid tests look for antibodies but some of them also detect antigens.

It’s quite common to think that HIV tests detect viruses in the blood. However, that is not the case. HIV tests are developed to detect HIV antibodies. This is the reason why HIV cannot be tested right after the risk situation. It takes some time for the body to produce antibodies and it takes up to three months for the negative test result to be reliable.

Many HIV tests also look for HIV antigens in the blood. The tests can detect antigens earlier than antibodies, meaning that if only antigens are found in the blood sample, HIV has been transmitted recently. Still HIV is only diagnosed when antibodies are found in the blood. A positive test result is always verified with a second test. In most cases antibodies are found in the blood six weeks after exposure to HIV. However if you get tested before three months have passed from the risk situation and the result was negative, you should get tested again after three months have passed.   Meanwhile, a condom or a dental dam should be used in sex. In anal intercourse, a water or silicone-based lubricant should be used also for protecting the condom and the mucosa.

A different kind of blood test is used when we want to find out how much HI-virus there is in a milliliter of blood.

When a person has been diagnosed with HIV, they give a blood sample 2-4 times a year to measure the virus levels in the blood. The HIV treatment (antiretroviral medicine, ARV) lowers the viral load in the blood and when the viral load is lower than 20 copies per mL, we use the term “undetectable”. According to scientific evidence undetectable also means that a person can’t pass on the virus in sex without a condom.

Antiretroviral (ARV) treatment effectively lowers the viral load to an undetectable level.  If the medication is not taken as prescribed, the viral load increases again. The virus keeps on copying itself and destroys cells that are vital for our immune system. This process will eventually to lead to AIDS, which is a severe condition where the body’s immune system is not capable of fighting against common infections caused by viruses and bacteria.

Fortunately, the medication is so effective nowadays that HIV does not advance into AIDS. That means that people living with HIV may live the way they choose to, and they do not need to worry about their infection. When HIV is detected early and the treatment is working, the life expectancy is the same as it is in the general population.

Where can I get tested for HIV?

You can get tested for HIV in local health care centers, venereal diseases outpatient clinics, Hivpoint, Red Cross Pluspoints, student health care, private health care clinics and health counselling services that are meant for people who inject drugs. You can also test yourself at home by using the HIV home testing kit. The home testing kit can be bought on the  Hivpoint website and in pharmacies. If you buy the test at another webstore, make sure that the test is CE-marked.

You should get tested for HIV if you have had sex without a condom or a dental dam and you are not sure about your sex partner’s HIV status. Shared equipment in drug use is also a risk factor for HIV transmission. It is also good to know that HIV is a rare illness in Finland, and it doesn’t transmit easily. If a person has a high risk of getting HIV, PrEP-medication may be good choice. However, a condom used with lubricant and a dental dam protects from HIV and also from other STIs.