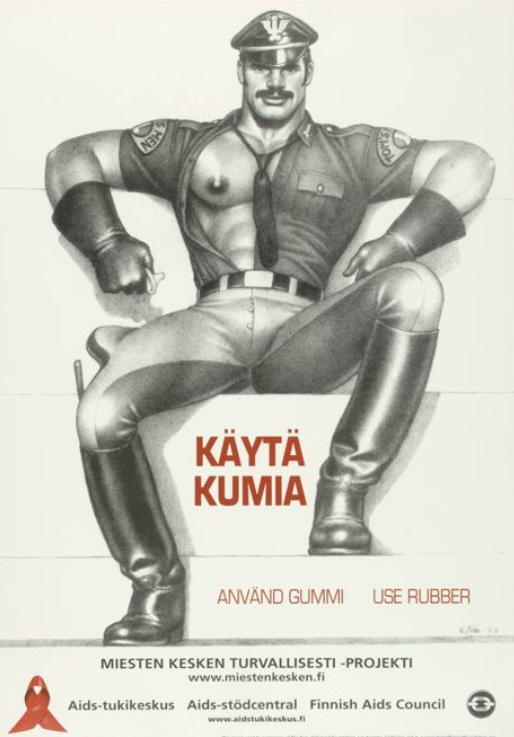 Touko Laaksonen, better known as Tom of Finland, has said to be the best-known Finnish visual artist. Tom’s art has had a huge impact to gay culture especially in the late 90’s. His characters portrayed a new image for masculine gay men. Men pictured in his drawings were often soldiers, police officers, lumberjacks, sailors, bikers and construction workers. Leather wear, boots and other outfits that have become significant part of fetishes are often pictured in Tom’s work. The men in his art countered the narrow stereotypes of gay men – guys in the drawings are strong, happy, active and sexy.

Although Tom’s work heightens the meaning of clothing there is no lack of penises (often unrealistically big) in his drawings which has compensated the invisibility of penises. Despite that our society has been described as phallocentric (which in many cases is true) the penis is rarely displayed in movies or TV series and the concept of penis shame exists.

Tom of Finland has done his share of preventing HIV/AIDS. His work has been used to promote HIV and AIDS work in Finland and around the world. In Finland Tom’s drawings have been pictured in posters and safe sex packages since 1988 reminding people to use a condom.

Some people question the use of Tom’s work to promote HIV work saying his drawings promote promiscuity which in their eyes is the reason behind the spread of HIV. Our argument to those people is that preventive work is most effective when it’s targeted to the right people, who in this case are the people enjoying sex with multiple partners. Tom’s idea was to make condom a sexy outfit that you put on to a special occasion or an event. This idea has played a significant role in HIV campaigns and the message behind it is still fresh and up to date. If Tom was still alive would he draw a picture with a guy swallowing a PrEP pill? Who knows?

This article is a shortened and modified version of a blog text by Teppo Heikkinen published in Finnish at miestenkesken.fi