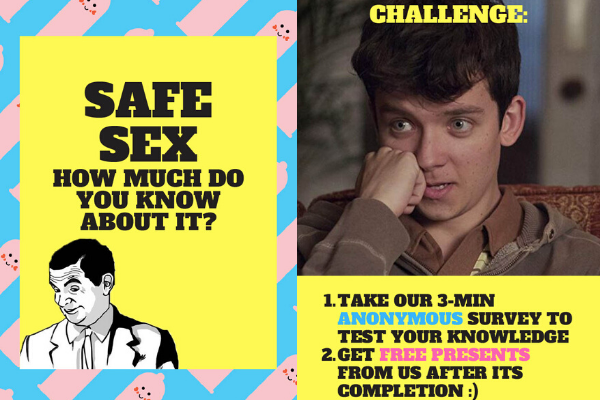 Hi! I am Ekaterina — an international Business Management graduate from a Finnish university of applied Sciences. I am volunteering for the Finnish HIV Foundation – Hivpoint. In this article, I will share with you my experience of organizing a pop-up event at the campus of my university dedicated to the World Aids Day in December 2019 and will tell you about what I’ve noticed regarding how the university community perceives HIV and HIV-positive people.

At the event, the university community was offered a chance to take an anonymous survey to learn its knowledge about HIV. We were happy to get dozens of responses. I found it interesting that 29% of total respondents said that they will change their opinion about a person if they learn that person is HIV-positive. Almost 21% of other respondents (not crossing with the first 29%) noted that their opinion about a person will change or not change depending on in which circumstances the person got infected. This measures the level of social stigma and prejudices towards HIV-positive people. Roughly, only a half of the respondents stated they will not change an opinion of a person in any case.

52% marked that it is false that with certain HIV-medication HIV will not transmit even during sex without a condom. However, that statement is actually true. Finally, 4% of respondents thought that they can get HIV either by kissing and hugging an HIV-positive person and 12 % by sharing common towels and/or plates with them.

So, quite many students still don’t have enough awareness of how HIV is transmitted and have certain stigma towards HIV-positive people and their lives. To me it seemed like HIV as a topic is still something difficult and shameful for people to talk about. I want to let you know that it is in a way understandable that you are scared or feel uncomfortable because of this topic – we hear and see so many spooky stories and HIV-positive people are wrongly represented in movies, social ads, and media.

However, I find it highly important to note that avoiding learning about HIV is something that actually increases your risks of getting it rather than lowers. So, let’s check your knowledge about HIV.

HIV can only be transmitted:

HIV cannot be transmitted in any other situation e.g. via mosquito bites, by being in a close space with an infected person, during kissing or hugging, etc.

Without medication, HIV turns into AIDS – the state when a person’s immune system is not able to protect the body anymore which leads to death. However, nowadays HIV positive people can live as long as HIV negative people. There is no medicine to cure HIV but lifelong HIV-treatment keeps HIV under control. This means people can live long healthy lives and stop worrying about infecting others. People on effective medication cannot pass on HIV even during sex without a condom.

Why are you scared of HIV?

Obviously, because it is a disease that cannot be cured. And as with any other chronic disease, it may be hard to accept having it forever at first. However, are we similarly scared of diabetes or scoliosis then? No? Why? Probably because we know that people can live long wholesome lives with those diseases due to developed medication. As I’ve mentioned above, there is a working medication for HIV-positive people as well. So, after a completely understandable shock from getting diagnosed with HIV you may analyze the situation with a cold head and realize that in 2020, if you take medication, you can live a perfectly healthy life.

And here we come to the main reason why we are scared of HIV, as for me – we are told that only “others”, “those ones” (often meaning “the wrong/bad ones”) get infected with it. Like I said before, the way we are being told about HIV, also effects on who we think can get it. If we are being told that only the “others” get it, we don’t see our own risk in getting infected or our need to get tested. The truth is anyone can get HIV. That is why it is crucial for all of us to know the scientifically proven facts about HIV and not discriminate against people living with HIV.

During the pop-up event, a couple of persons approached me saying that what we were doing was kind of purposeless because “this problem is not so big in Finland”. Ironically, this is the phrase that proves that our event was purposeful. Once you think it’s not about you, you are more likely to stop protecting yourself, and you get into the risk of getting HIV or other STIs. What is more, I find such thoughts unrespectful for the HIV-positive people living in Finland and the ones who, unfortunately, died from AIDS in Finland. Even if the numbers aren’t as high as in the countries with poorer sex education and medication availability, it doesn’t mean we should ignore the fact of the cases that still happen. Here we are talking about real people – maybe your neighbours, colleagues or friends to whom this “unlikely event” happened. The results of our survey, where 56% of people didn’t know the correct window period for HIV testing, 52% of respondents thought it’s false that being on effective medication, a person cannot transmit HIV even without a condom, and 28% of people thought that nowadays HIV-positive people live shorter lives than the HIV-negative ones, also prove that the problem might get bigger if people continue being unaware of how HIV is transmitted and whether you can live a long healthy life with it.

Having in mind all the previously said, I hope we can be civilized people who, no matter in which circumstances a person got HIV, will treat that person with respect and empathy, not hate. I also hope that the Finnish universities community and the Finnish society in general wants to be progressive, kind, and tolerant, don’t we?