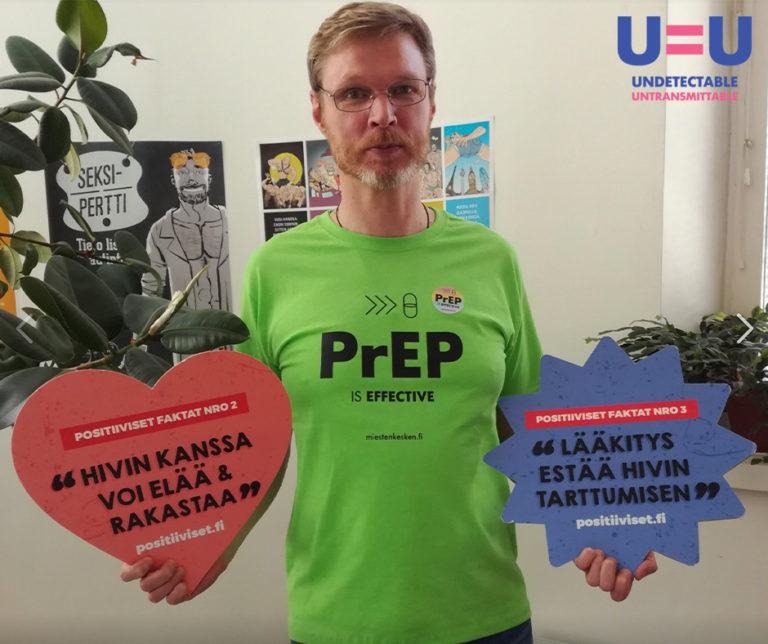 U=U is a campaign that shares knowledge about HIV-treatment and the effective HIV medication. It also promotes the human and sexual rights of the people living with HIV. The most important message is that HIV does not transmit in sex without a condom if the person living with HIV is on effective HIV medication. The medication does not cure HIV, but the virus load in the body becomes too low for transmission to happen in sex without a condom. The person living with HIV stays healthy and can live the way they choose to.

The campaign promotes the human rights of people living HIV because they still face stigma in their social relationships and society. Stigma can have a negative impact for the quality of life. When people living with HIV become frequently stigmatized in their own social environments, and in legal praxis or health care services, they may start experiencing self-stigma. This means that they may perceive themselves through the lenses of stigma which can lead to tragical consequences.

The knowledge of U=U spreads slowly

In this article, we interview an employee at Positiiviset Ry (Hiv-Finland), who shares with us knowledge about the stigma that people living with HIV face. The article is divided into two parts and this is the first part. whole. This first part is focused on stigma in social structures while the second part is mostly about stigma in personal relationships and life. Hiv Finland is an organization that provides peer support and counselling services for people who live with HIV. They also share knowledge and promote human rights. Hiv Finland hasworked hard to spread knowledge about the efficacy of HIV-treatment, beyond healthcare workers, into the general public also. Tapani Valkonen is a project coordinator and sexual counsellor at Hiv Finland and he contemplates why this information is not common knowledge yet, although it has been known that HIV does not transmit in sex without a condom for a while already.

“The Swiss statement declared over ten years ago that HIV does not transmit in sex without a condom when the person is on effective HIV medication. If the Swiss, with their accuracy, had the courage to make such a statement, how is it possible that the topic is brought up in public media this slowly?”

Recently, an article about this topic was published in Helsingin Sanomat and Valkonen takes it as a step in the right direction.

“We have been working around this topic for a while already but a big media like Helsingin Sanomat can reach more people than our campaigns with a limited budget do.”

It is important that the general public has right information about HIV, because outdated knowledge is misleading and maintains the stigma around HIV. Valkonen emphasizes that stigma is often related to fear and lack of knowledge, which easily leads to discrimination or inappropriate behavior.

“Now it’s time to open our eyes. We have strong scientific evidence that HIV does not transmit in sex without a condom, so there is no room for discrimination and stigma. Stigma shouldn’t have existed here in the first place. We need to stop persecuting and mentally torturing people who live with HIV.”

HIV related stigma in social relationships and society can be examined in many ways. Societal practices themselves may be stigmatizing or they may maintain stigmatizing practices. Legal praxis for instance may be taken as an example of practices that are not based on proven scientific evidence. Although some improvement has been seen in legal praxis, it hasn’t changed enough.A person living with HIV may become accused if they haven’t told about their HIV status before having sex even though they were on effective treatment.

“It is a Nordic phenomenon to punish about HIV transmission or a threat of it.”

“Based on international experience and by adopting a human rights based approach, HIV should never be a basis for punishment or criminal prosecution. Mentions of HIV and HIV medication in these processes is structural discrimination and upholds the stigma”, Valkonen states. One of the adverse reactions of structural discrimination is that people do not want to get tested for HIV.

”There is no proof that prosecution or threats of prosecution have ever been beneficial. It’s quite the opposite, many people do not get tested for HIV because of the fear of getting prosecuted and stigmatized. Without treatment, HIV may continue to transmit forward.”

U=U has a message for us all. The message is to intervene and advocate for change in structural practices, that are based on old knowledge. By doing so, we help to break down the stigma and discriminatory attitudes.