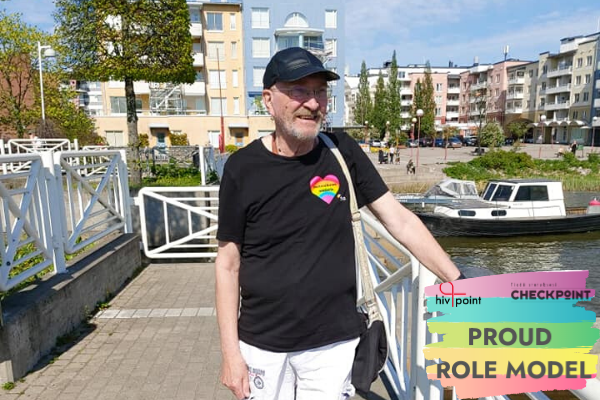 ” When I talk about HIV and ageing I’m creating a safer future for myself and others.”

Risto is a 70-year-old active pensioner. Risto is also an HIV positive gay man who has done and experienced a great deal in his life. At the time being Risto is a volunteer at Seta’s senior work and is also a peer educator. We got a chance to interview Risto and got to know some of his thoughts.

Thank you so much Risto for giving us this interview. The Helsinki Pride theme this year is Role Models. What kind of role models have you had during your life and what impact have they had on you?

I had many role models growing up. I discovered in an early age that I belong to a minority – I just didn’t know to which minority. Through role models I tried to reflect on what I would like to be like when I grew up. My very first role model was my mother. I thought that all boys must eventually get married and that my mom would be the safest partner for me. I had amazing teachers at school, and they became role models for me. In primary school they taught me how to read and I found The Famous Five novels which I read over and over. In secondary school, the teachers taught me many new skills like photographing. These teachers were my idols and gave my life a direction. They found qualities in me that I didn’t know existed and they gave me a feeling of acceptance. In my opinion it’s extremely important to help and support children and youth to find something that interests them in their life.

When I was 16 years old, I saw a headline in a newspaper that said that they had found a “gay nest” in Helsinki. That headline opened my eyes and I felt that there was a place for someone like me. A place I could belong to, a nest, a place to call home.   The article mentioned that a dog also lived there  – that nailed it for me –  I love animals. For me the headline wasn’t negative – even though the article described the “gay nest” in a very negative way.

What kind of role models did you miss growing up?

I would have needed someone to explain to me where my weird feeling came from. The heterosexual lifestyle was the only acceptable way to live – homosexuality was both a crime and a disease at that time. I had learned to hide a big part of myself while growing up and I have led a double life for a significant part of my life. In my childhood home the atmosphere was liberal, and I didn’t hear any negative talk about homosexuality. Despite that I had society’s expectations in the back of my head. I grew up in the 1950’s which was a rough period. The world after the war was tough and we were raised to acknowledge that Finland needs us, and that life has a certain script that one should follow.

Only in the 1970’s I heard about a celebrity who was openly gay. It would have meant the world to me if there had been one while I was growing up. It would have widened my narrow view of life a little bit.

What would you say to your 13-year-old self?

When I was thirteen it was the year 1963. I would say to myself: Wait a few years and things will start to work out for you and you will find your place in this world. You will also learn to live life your own way and not the way others expect you to. I wish I could have been more open about myself, but it wasn’t possible at that time. The headline about “the gay nest” was the first glance into who I really am.

What made you talk about ageing with HIV publicly?

In the 1970’s I trained to be a horse-riding teacher. I thought that if people found out that I was gay they would automatically see me as a pedophile, and I would not be able to work with children or youth. I knew what I was, but the society was not ready to accept me for who I am. Only while visiting Helsinki and traveling aboard could I be myself. I hid my identity until 1994 when I met the man of my dreams. We started seeing each other and decided to move in together. I asked my mom and siblings to visit me and told them that I am gay and that I have found the love of my life and that we are going to move in together. It’s typical to think that coming out is extremely difficult and people will abandon you. In my case, my family just looked at me and stated that we have already known for a long time.

What I didn’t tell my family at the time was that my partner was HIV positive. It was the year 1994 and there was no effective medicine available for HIV. I went for regular checkups and when I got a severe flu in December 1997 my partner encouraged me to get tested immediately. When I called my health center for the results, they told me that the test had come out positive which means that I have HIV. I told my family in 1997 because I was afraid that they would find out anyway and I wanted to be the one to tell them.

The first time I spoke publicly about being HIV positive was in 2010. The Swiss statement saying that HIV doesn’t transmit when a person is on medication had already been published. Sini Pasanen from HIV Finland asked me if could talk about HIV publicly with my own name and face showing. At the time I was living alone, and I don’t have kids, so there wasn’t anyone I needed to protect. I was scared that I would get death threats and be rejected, as that had happened a few years before when I disclosed my HIV status in a dating app. I agreed anyway because I knew how difficult life could be for people living with HIV. I also knew that only a person living with HIV can tell what it’s really like.  When the article was published, I was terrified but to my big surprise I didn’t receive any negative feedback. After that first interview, I have been interviewed numerous times, I have trained health care professionals and volunteered as a peer educator at Seta’s senior work. When I speak publicly about HIV and ageing I create a safer future to myself and other people living with HIV.

What impact has speaking up had on your life?

It’s great that speaking up has not brought anything negative to my life – vice versa. I’ve received most gratitude just for bringing up and speaking about these topics. Especially health care professionals have thanked me for sharing my story. People like me with real life stories are the ones most listened to. I am happy to see that more people are getting tested for HIV, that’s a real change. In the beginning of this year I was telling my story for high school kids and afterwards a student came up to me and said that “after hearing your story I have the courage to come out”. It was a special moment. The strength of role models comes from telling your own story.

Warm thanks to you Risto for giving this interview. What would you like to say to people during Helsinki Pride week?

The most important thing I want to say is: Go get tested for HIV! There are many possibilities for that nowadays.