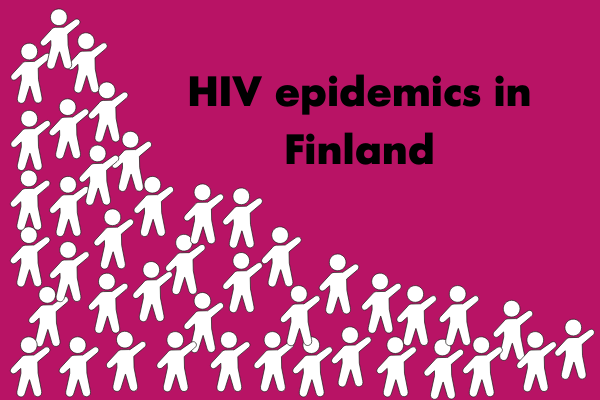 You might have heard the term “HIV epidemic”. The word epidemic usually refers to a widespread and infectious disease, but many do not know what an epidemic is when it comes to HIV. Epidemics do not have to be global and can be very concentrated amongst  certain groups.

For this post, we interviewed Kirsi Liitsola from the Finnish National Institute of Health and Welfare. Kirsi explained a bit about HIV epidemiology, both in Finland and abroad. Epidemiology refers to studying how common different diseases are and why.

In order to keep track of all new infections, Finland has a national infectious diseases registry where laboratories and medical professionals report all new cases of HIV. Reporting is mandatory, and the register has a good overview of the epidemics in Finland. The number of reported infections is stable in Finland with no significant increases. Yearly less than 200 new HIV infections are reported to the registry. The total amount of ever reported cases in Finland was just over 4000 by the end of 2018. To know the exact amount of HIV cases today, meaning the HIV prevalence, we would need to know the size of the vulnerable populations. Because we do not know this and because some people do not know their HIV status, not all cases of HIV in Finland are in the registry. This is why testing is important!

To determine the prevalence in Finland, the health institute uses data from the national registry, data from screenings of pregnant women and data of prevalence studies carried out in most-at-risk populations. Currently in Finland, the HIV prevalence in the general population is far less than 1% and the prevalence is therefore low. Prevalence studies among most-at-risk groups, such as gay- and bisexual men, people who inject drugs and sex workers show that the prevalence is less than 5%. Based on this, Finland is a low prevalence country. Although Finland is a low prevalence country, there are still subpopulations that are affected by HIV, and there are also some AIDS cases – but these are strongly connected with late diagnosis. Only zero to two people die annually in Finland from AIDS. These deaths happen because of late diagnosis. To improve the situation in Finland, we must increase testing rate to find infections earlier. The HIV situation in Finland is stable, but if we can get more people tested, we can reduce the new HIV infections!